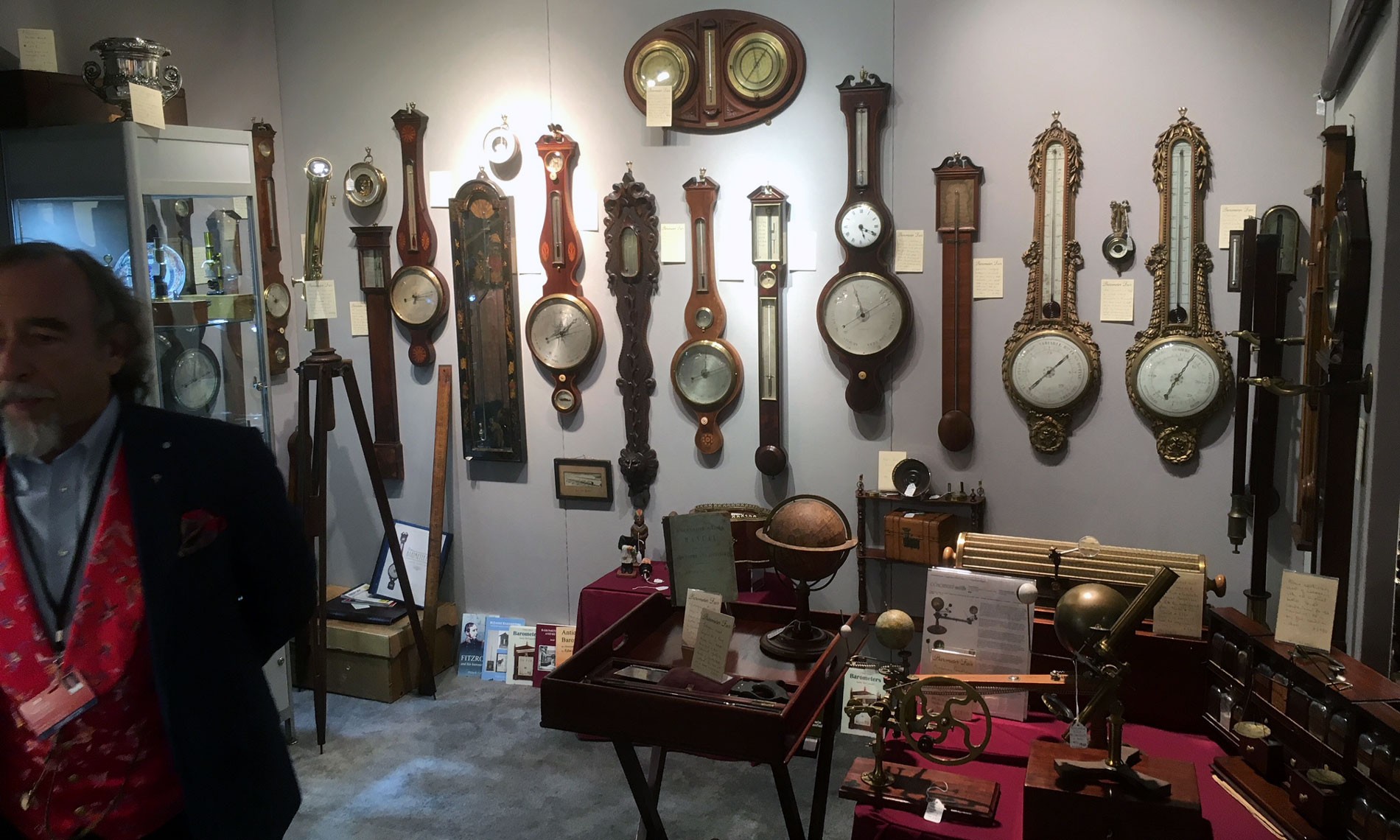 Barometer Fair started life in London, England, although John Forster, the founder, first developed an interest in barometers in 1979 while living in the North of England. What was originally a hobby or pastime became a business in London in 1986 and then transferred to Sarasota, Florida in 1993.

Barometer Fair is a barometer shop in Sarasota, FL, and offers a complete restoration service as well as a large stock of fully restored, working, antique barometers.

John Forster and his American wife, Marlene, exhibit barometers at 20-30 antique shows a year (See Show Calendar) mostly along the East Coast and are able to collect barometers needing restoration and return fully restored ones at this time.

The mercury barometer was invented in 1643 by Torricelli, a student of Galileo, in Florence, Italy. At first it was found, when turning a glass tube full of mercury upside down, that there was a vacuum at the top; then it was discovered that the height of the mercury column varied slightly as both its altitude was changed and as the weather changed. These two discoveries led to many years of research by scientists, mountaineers, and weathermen, not to mention cabinet makers, glass blowers, and engravers, and the antique barometer as we now know it was created.

Barometers made before 1680 are extremely scarce since they were originally very crude and were used by scientists as tools of discovery. Gradually, the simple plank with a tube attached became the stick barometer, with its ornate case work, engraved silvered-brass register plate, tube and cistern cover. Until about 1780 barometers were still the preserve of scientists and the wealthy, but they had started to move out of Italy, up through France and into England. The Italian craftsmen responsible for making barometers - and there were many from the northern towns of Venice and Milan, still famous for their glass blowing abilities - arrived in England in the late eighteenth century.

By 1750 wheel barometers were being made in France, both in the familiar banjo shape albeit fabulously gilded in the Louis XV style of French furniture, as well as in the less frequently seen - but very desirable - octagonal shape. These were some of the first wheel barometers and they eventually made their way to England, again with the north-migrating Italian craftsmen, by about 1800.

So by 1810 we had the now familiar two dial wheel, or banjo, barometer alongside the door stick barometer. Designs had become more or less standardised after years of individuality and unique creativity. The banjo, as it became popularly known, is mahogany veneered on a pine carcase, with an architectural - or broken arch - pediment, twin lines of boxwood and ebony stringing around the edge; a long alcohol thermometer over an 8 inch silvered brass dial; and 4 inlaid paterae, usually sunbursts at the top and bottom, and conch shells on the two sides.

The mercury tube is enclosed behind a door in the rear of the case; and by a system of strings, weights and a pulley, the reading of the air pressure is transferred to a needle which moves over the circular register, or dial, on the front. The 1810 stick barometer, however, did not require any mechanism, and the reading of the air pressure is taken directly from the height of the mercury in the tube - exactly as it had been in 1643.

This also has an architectural pediment over a glazed door with a silvered brass register plate behind. The glass tube is mounted on the front of the stick, which is mahogany veneered on pine with solid mahogany edges, while the cistern cover at the bottom comprises a two part hemispherical solid mahogany shape.

This period is the pinnacle of antique barometer making. Over the next 40 years, the 2 dial 8 inch banjo morphed into 3, 4 and 5 dials, with 4", 6", 10", 12" and larger diameter dials; the pediment changes from architectural to swan neck, round top and onion top; and the wood changes from mahogany to rosewood (which was frequently inlaid with mother-of-pearl or brass) to oak.

By 1870 mercury barometers had virtually ceased to be made, apart from the curious Admiral Fitzroy Barometer, helped on the way out by the invention of the Aneroid barometers almost 200 years to the day after Torricelli's discovery.

In 1844 the first commercially viable aneroid barometer was made by Lucien Vidie in France. It comprised an evacuated drum whose minute expansions and contractions under pressure changes were transferred to a needle moving over a dial.

Aneroid - from the Greek, meaning without liquid (i.e. no mercury) - barometers solved one of the major problems associated with the mercury barometer: they were portable. They also solved many minor problems by being small, inexpensive, robust, and accurate. Within 20 years of their introduction they spelt the end of the mercury barometer. Initially aneroid barometers were encased in brass, 4" diameter, with a beveled glass on the front so that the silvered brass scale could be read. The glass was held in place by a bezel which, in the early ones, has an X pattern around the edge. A curved alcohol thermometer was positioned at the bottom of the dial, and the name of the first retailer - E J Dent of Paris (of clock fame) - was engraved on the dial.

Within 25 years aneroid barometers were being manufactured by the thousands in both 4 and 7 inch diameter with a hanging ring on the top. The larger ones frequently had a circular hole cut in the face so that the mechanism could be viewed and had twin curved thermometers below, in alcohol and mercury, reading in both Centigrade and Fahrenheit.

By 1900 the mechanism was not only being fitted into 24-30 inch tall carved oak cases with 8 inch metal, paper and porcelain dials, with a thermometer mounted above, but it was also reduced in size to fit into a 2 or 3 inch brass case for greater portability. These very small, or pocket barometers, not only predicted the weather, but, by the same principle of measuring air pressure, were used as altimeters for the gentleman traveler and even mountaineers and balloonists.